The AVN-CU4-DANTE is a configurable portable commentator unit using Dante® AoIP. It is a dual version of the AVN-CU2-DANTE providing four mic/line inputs with a wide, adjustable gain range and four stereo headphone outputs with lockable jack sockets, suitable for operation by three or four commentators.

Fully featured, this unit allows you to handle virtually any commentary situation with both Dante AoIP and 4 wire connections, dual redundant Dante networking and multiple AC/DC/PoE power options. Up to 48 rotary encoders can be used on inputs, outputs or cross-points, allowing talkback feeds, commentary and audio mixing to be handled in one unit.

It’s been designed from the ground up to be configurable for different situations with config files that can be saved and recalled for quick setup. Additionally, buttons and rotary encoders can be locked out from use, if the unit is being operated by less-technical commentators.

The featureset is as per the AVN-CU2-DANTE, with the following differences. There are two displays with a doubling of operational controls:

To power the unit, as well as the dual PoE ports and 12V 4 pin XLR DC input, there is an AC mains input on an IEC inlet, with a universal supply.

The unit supports up to 16 input and output AoIP channels and up to 16 simultaneous input and output AoIP streams. Stream setup to and from the unit is initially via Dante&reg; Controller with more detailed configuration performed using the built-in web GUI. The power of this unit lies in the impressive mix engine which overlays the usual Dante® Controller settings. Once Dante® flows have been made, inputs and outputs can be mixed freely to AoIP or physical inputs and outputs, controlled using the programmable buttons and rotary encoders, which control the gain and pan of inputs, outputs or cross-points, allowing total flexibility for different situations. 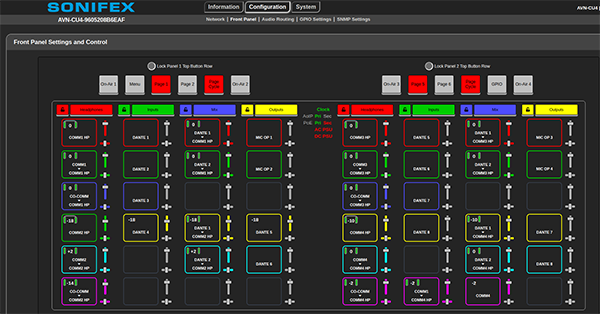 It can be used in any number of different commentary situations, controlled manually or remotely and controls can be ‘locked down’ so that they can’t be tampered with or altered, to guarantee reliable operation. Housed in a rugged and intuitive, user-friendly package, it’s a truly different way of looking at how commentary units should operate.

Traditional commentary units have fixed analogue and digital I/O and fixed controls in fixed positions on the unit. Their inputs and outputs are defined at hardware design and are thus limited by that initial design, including limited routing, mixing and DSP of the audio pathways.

We’ve taken a different approach with the AVN-CU4-DANTE. It was designed from the ground up to be totally flexible in operation and the use of Dante AoIP means that inputs and outputs can be added as required (up to a max of 16 per unit). Because any physical analogue or digital input can be mixed and routed with any Dante AoIP input to any physical output or Dante output, you can define your own audio pathways. Additionally you can choose which of those pathways need to be controlled (volume and pan) by the use of rotary encoders.

Using a built-in web GUI, up to 8 nameable pages of 6 rotary encoders (48 in total) can be placed on the mix matrix at inputs, outputs or cross-points. Encoders can control the volume and pan of headphones and volume of inputs, outputs or cross-points. Each rotary encoder has a separate colour-coded meter section showing the channel name, detailed level metering and left/right panning on a bright daylight reading display.

The unit can be fully remotely controlled from the web interface, which mimics the front panel of the unit and includes live metering. All the controls can be operated as if at the unit and there are front-panel lock-out options for every button and encoder, with ‘quick lock-out’ for the rows of buttons and pages of encoders. This allows you to configure the unit for simple operation by the talent but with more complex setups, say, for mixing the talkback or feeds from an OB truck.

It’s powered using Power over Ethernet (PoE), using Neutrik EtherCON&reg; connectors, with primary and secondary ports for power and data redundancy. There’s an additional 4 pin XLR 12V DC input and an AC mains input on an IEC inlet, with a universal supply. The unit supports up to 16 input and output AoIP channels and up to 16 simultaneous input and output AoIP streams.

The 12 x push-button rotary encoders and 24 x key-cap buttons are fully configurable, to control input & output levels and panning. The 12 key-cap buttons can have different colours for the on and off functions.

Metering is available per input/output, with output metering configurable as pre or post level adjustment. The top of the display shows output metering, a limiter indication and the name of the output. An adjustable limiter is available on every output and is applied automatically to prevent signal clipping.

Four wire connections on the rear panel provide a number of ways of linking to the outside world. There are:

The I/O can be assigned as programme inputs, talkback inputs, mic outputs (line level), PA outputs, zone outputs or talkback outputs, as desired. In addition, the AES/analogue connections can be used as an insert or exit point into/out from the AoIP network.

There are 10 x configurable GPIO on a 15 way D-type connector with 1 x switched changeover output. GPIO & VGPIO (virtual GPIO, i.e. network commands) can be configured on a matrix to visually show actions, combined with button presses and event triggers, such as input/output muting, which enables some automation. Button presses can control buttons and functions on other network connected AVN-CU units using VGPIO.

The complete configuration of the unit, including all encoder settings, button setups and Dante mix matrix audio routes, can be saved off to a text editable .json file. Up to 8 of these files can be stored on the unit and loaded from the main Menu, meaning that the unit can be pre-configured for any venue, or event and with these setups instantly recalled onsite.

All of the buttons have key-cap text and can be configured for any button in any position. There are some standard operations available: 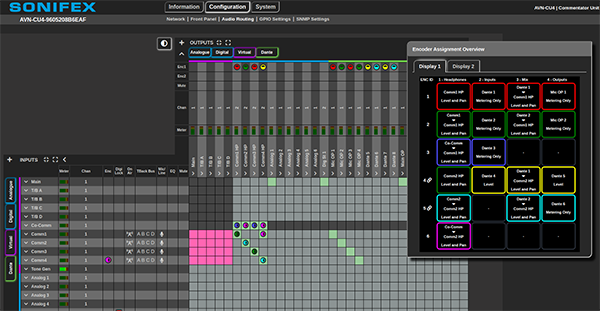 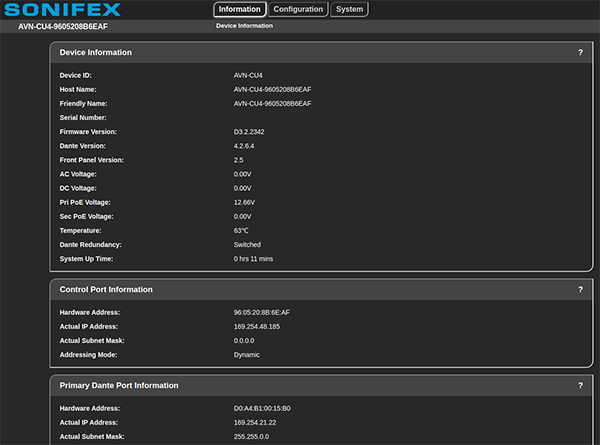 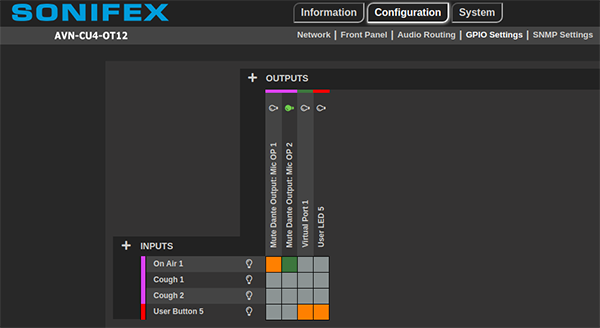 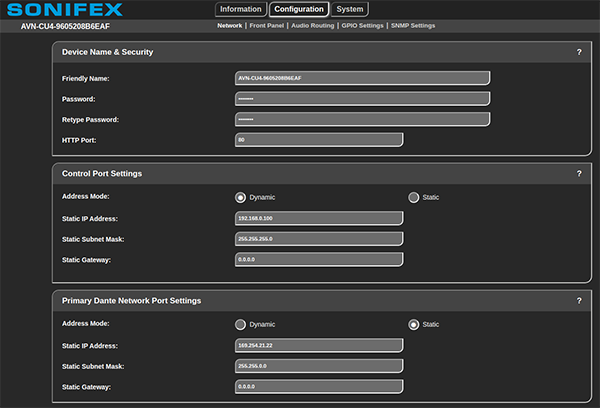 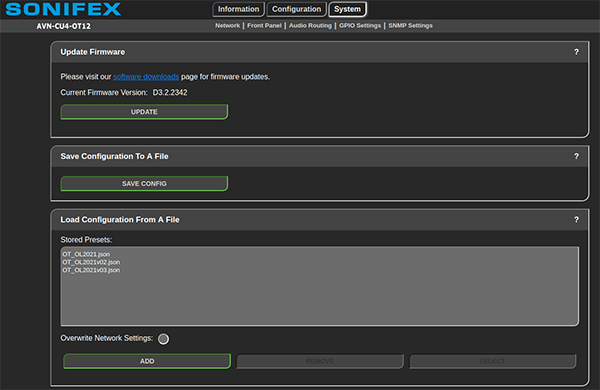