The AVN-TB products are IP audio based talkback intercom units with an advanced feature set, allowing them to be used in multiple applications. With both 4-wire analogue inputs and outputs, as well as AoIP network audio connectivity, the AVN-TB units can be used with existing legacy 4-wire systems and with new AES67 AoIP networked audio infrastructure. Additionally, all audio is at 48kHz sample rate, meaning that itï¿½s broadcast quality audio as standard.

RAVENNA (of which AES67 is a subset) allows for the distribution of audio across a network. The AVN range use RAVENNA as the communication method providing compatibility with other AES67 systems.

The AVN-TB10AR is a 10 button intercom meaning that 10 other ï¿½stationsï¿½ can be defined, one per button, for communication. Comms can be made as a Talk action, a Listen action or a duplex Talk/Listen action to/from each station. Coloured LEDs in the buttons help to show which action is being used and there is also a Callback button for when youï¿½re unavailable to receive a call.

The Page button is used to speak to all stations (or a defined list of stations) and Group Talk functions can be enabled to page particular groups of stations.

Two monitor buttons allow for routing audio directly to the speaker e.g. to take an IFB feed or an off-air transmission signal. Signals can be ducked or mixed when a talkback input is received to the speakers or headphones.

Three user defined buttons can be programmed for different functions, such as for Group Talk.

The speaker mutes automatically when headphones are inserted and the volume level of headphones, speaker and incoming sources can all be controlled with one front panel rotary encoder volume control knob, which shows the level using RGB LEDs around the outside of the knob.

Buttons are available for microphone mute (cough) and speaker mute actions and these can be controlled remotely by GPI or network commands.

Each unit has a built-in webserver which is where the majority of settings and configurations are made. The front panel OLED display can also be used to configure the unit, although more functionality is available by using the webserver. The webserver is a responsive design meaning that it can be used with small screens on smartphones and tablets.

Front panel LEDs show the AoIP network status, synchronisation status, whether AGC is being used and the status of the AC and DC power supply inputs. The brightness of the OLED display and LED indicators can be adjusted for low or high lighting conditions.

The unit has a front panel power button and dual power connectors - an IEC mains input and a 12V DC input, which allows the AVN-TB10AR to be used for both studio and mobile installations. Also, a secondary power source reduces the effect of power down events. In any case, the unit monitors the status of both power sources and displays this on the front panel.

10 GPIOs (general purpose inputs/outputs) and a programmable relay output can be configured to indicate critical states for the unit, via the 15 way D-type connector, for example, to show loss of DC power, or to show a button press action.

Talkback Intercoms Using Audio Over IP, RAVENNA/AES 67
Our new range of AVN (Audio/Video/Network) talkback/listening/paging intercoms aid communication between studios, stages, theatres, offices and different areas in a facility or building complex. They have both 4-wire and AoIP sources and destinations, and use RAVENNA/AES67 as the audio transport mechanism, allowing simple CAT 5 cabling and expansion.

Each AVN-TB talkback unit has a built-in webserver for setup and configuration. The webserver is responsive, and resizes depending on the size of your screen, meaning that it can be used on large monitors or small handheld devices such as smart-phones. Help information is shown on the right hand side of the screen so it’s a good place to go to find out how the unit operates. 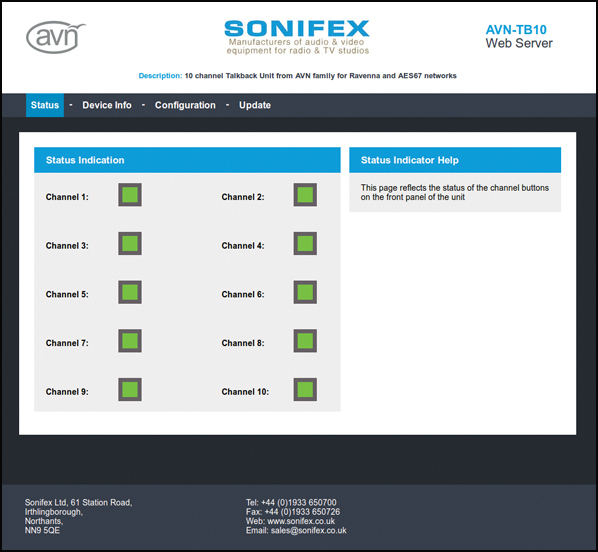 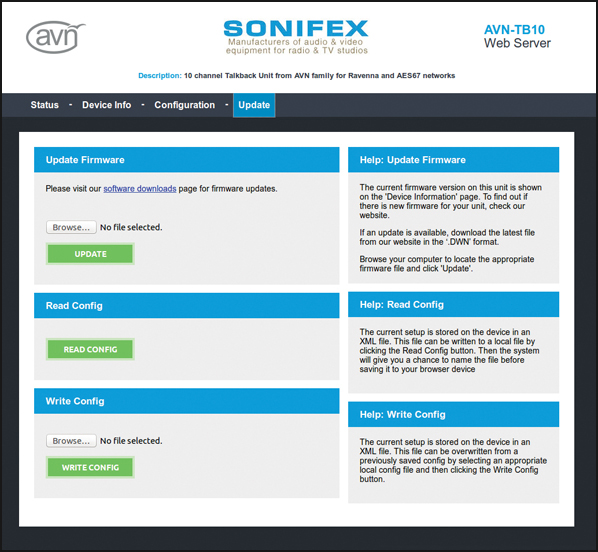 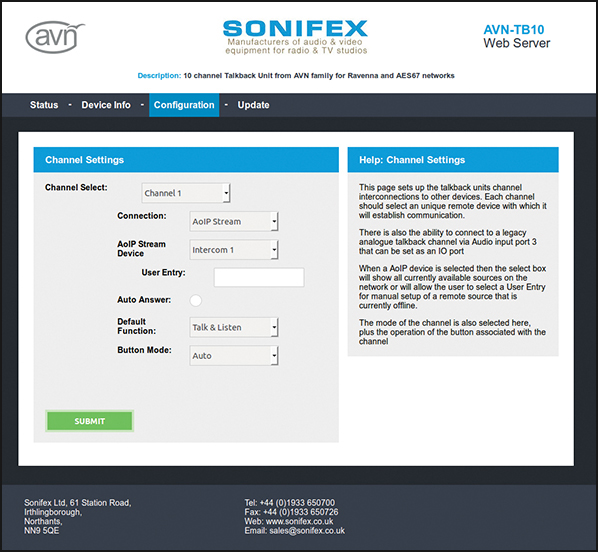 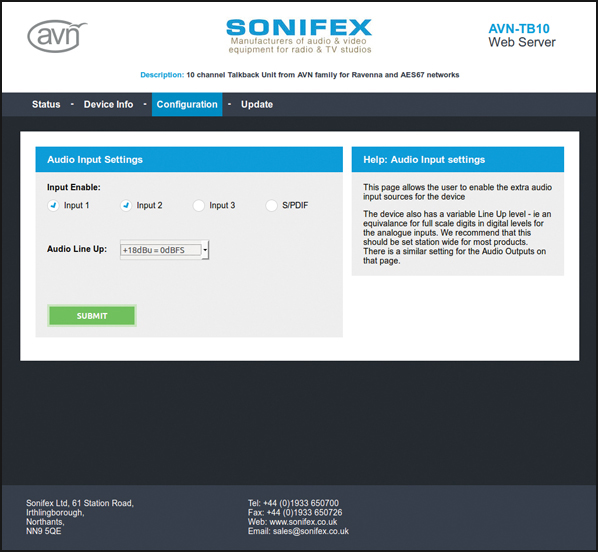 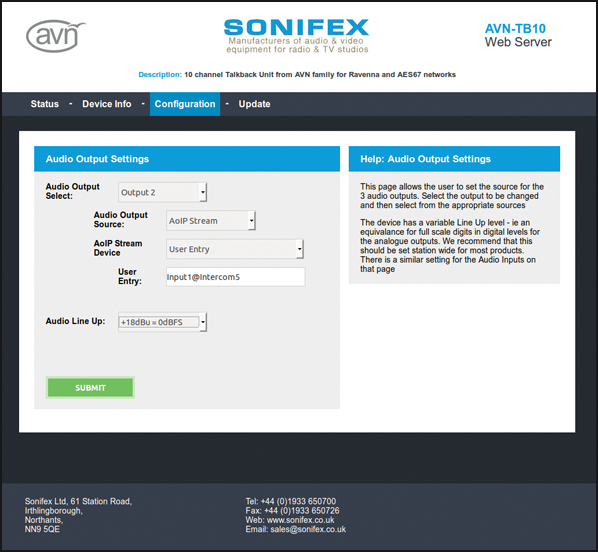 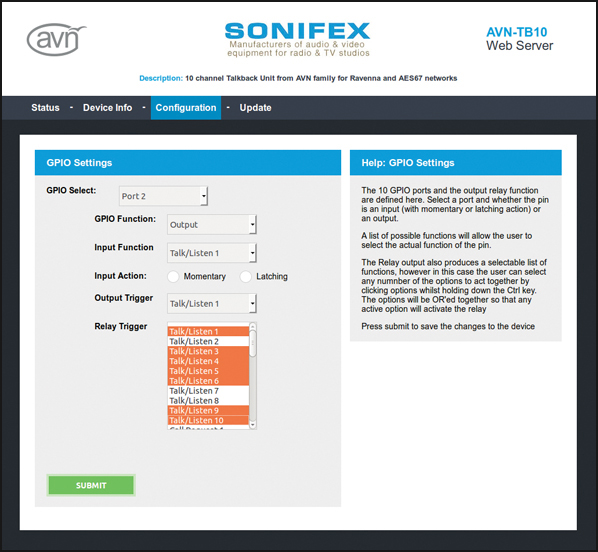