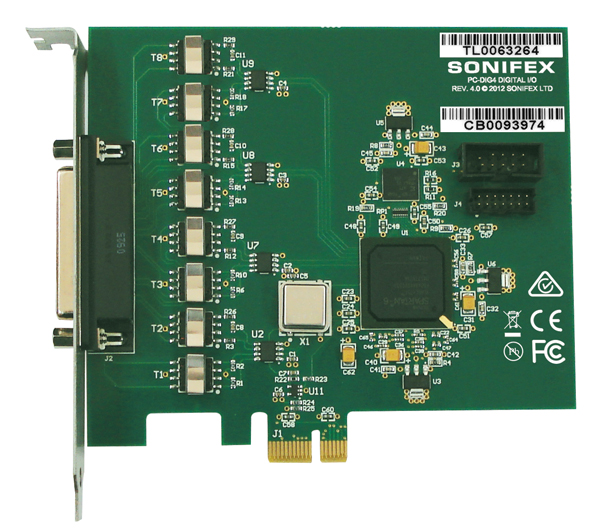 The Digitorc 4 has four AES-3 stereo input and output channels on a Windows platform and is fully compatible with the Wave, DirectSound, DirectShow, MCI and Core Audio APIs.

On the card is implemented both a single lane bus-master PCIe interface and four x 24-bit AES-3 codecs. Independent asynchronous sampling rate conversion on the inputs supports rates from 32kHz to 96kHz, while the output rate can be configured as 96kHz, 88.2kHz, 48kHz, 44.1kHz or 32kHz, either free-running or locked to an AES3 or AES11 reference on any of the inputs. When used with an internet time standard (e.g.ntp.org), a very precise sampling rate can be achieved.

Software sampling rate conversion is automatically inserted by Windows when the application rate does not match the hardware rate, ensuring that files of any sample rate can be played. Extended software bit depths of 32 and 24 bits are supported as well as 16 and 8 bits for playback and recording.

The playback topology consists of a master output level, mute control and peak meter, a wave level and mute control, and input monitor level and mute controls for each of the line inputs. The record topology consists of a master input level, mute control and peak meter, line input level controls for each of the physical inputs and a digital loopback level control and mute. The range on the input and output master controls is -96dB to +6dB, while the individual line controls range from -96dB to 0dB. The mixer functions allow inputs to be mixed back into each output, while a digital loopback is available from each playback channel into its corresponding record channel.

High quality electrostatically-shielded transformers are used on all the inputs and outputs to give superb performance.

Multiple cards may be installed in a single PC.

A 25-pin D-type connector to 8 x XLR breakout lead is offered as an option.