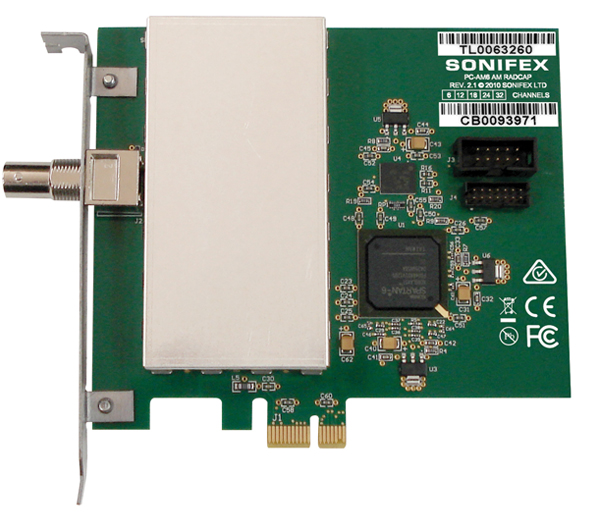 The AM Radcap PCIe card is a radio capture card designed for simultaneous recording of up to 32 radio stations. The frequency of each individual station may be set in software and its audio appears as a standard Windows audio input device.

The AM Radcap uses a high speed analogue-to-digital converter to digitise the entire AM band, with advanced digital signal processing on a Spartan 6 FPGA used to tune and extract the audio for each individual station. It can be configured to either create a separate audio stream for each station or to pair stations together as 2-channel streams.

A WDM driver for Windows XP, Windows 7/8/10 and other versions is supplied as well software for setting the tuner frequencies and monitoring the received audio.

A recording level control, mute control and peak meter are provided for each station (or pair of stations) through the devices’ mixer ports. The default level setting is 50%, and at this setting 100% modulation will produce a peak audio level 6dB below clipping.

A utility called AmSpectrum is supplied. This displays the RF spectrum from 500kHz to 1700kHz and may be useful in selecting the best location for the antenna or resolving interference problems. The receiver bandwidth can be set to wide (default) or narrow. The narrow setting restricts the audio response to about 3kHz, which may be useful in noisy environments.

A utility program called Tuner is also supplied which can be used to set the frequency of each station and to monitor each station through the PC’s standard sound card or motherboard sound port. The Tuner program also provides relative signal strength indicator bars which may be useful in adjusting antenna placement.