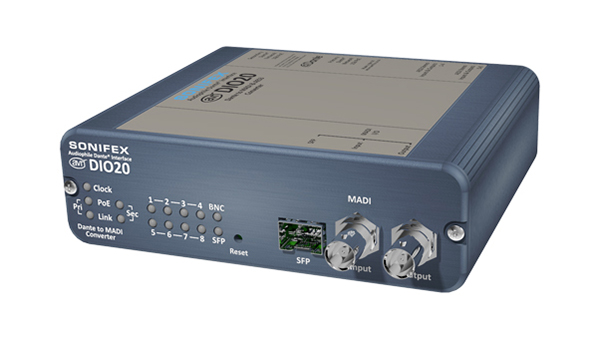 Sonifex are pleased to announce the release of the new AVN-DIO20, a MADI and AES3 to Dante bridging device allowing MADI to connect bidirectionally with AoIP, together with 8 stereo channels of AES3. This elegant PoE audio interface provides a simple method of connecting legacy MADI interfaces on SFP and BNC MADI connections, to the Dante AoIP audio network.

The unit accepts 8 stereo AES3 inputs and place them on the Dante network, replacing 16 of the selected MADI input channels. The unit also sends 8 stereo AES3 outputs which can be sourced from the Dante channels, in blocks of 16.