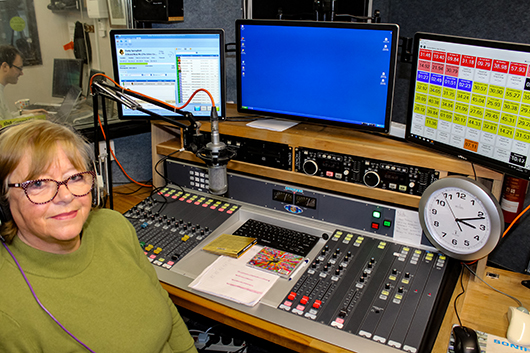 The newly completed studio 1 at WCR Community Radio, with presenter Pauline Payton-Smith seated at one of the Sonifex S2 consoles.

WCR Community Radio was founded in 1996 as a hospital radio station broadcasting from a backroom at a local theatre. The operation moved after West Wiltshire District Council offered it the use of some disused public toilets attached to the Warminster civic centre. The community rallied to renovate the building and make it fit for purpose - bringing a new and special significance to the name 'WCR'.

Early on, the team had ambitions for a full time FM license, and that process that came to fruition in 2012, when WCR began broadcasting to the Warminster community on 105.5FM. Its current facility - now expanded into more of the civic centre - has three studios, including a production and teaching room, plus reception, kitchen, and OB kit storage. There is also a busy OB vehicle with link transmitter.

As part of the latest refurbishment, the station team decided to replace its older consoles, which had ongoing issues since they were installed seven years ago. "We had a look around for another desk," says Mole, "And we settled on the Sonifex S2.

"We did a lot of research and we had some time with a trial desk. We were blown away by the S2. We like the modularity, coupled with all the advantages of a high-tech desk and modern electronics. They are beautiful pieces of work. A few years down the line, if there's a problem with a fader, we can easily just put a new one in and send the other for refurbishment."

The Sonifex S2 features hot-swappable input and output modules - analogue and digital - and a wide selection of optional main surface and meterbridge-mounting modules to customise every aspect and make it bespoke for every facility.

Importantly, WCR relies on around 50 volunteers to make the station run, and it's important that the console never obstructs new talent or operators. "The versatility of it means we don't have to have split faders on most of the fader channels. There are dual channel inputs, but there's also this wonderful meterbridge module - the S2-M6SS 6 Way Source Select Panel - where you can have six selectable inputs to one stereo channel, or to the monitor inputs. Instead of crowding all our faders with inputs, you just select what you want, put a fader up, and there it is, which is an absolute dream."

All OB inputs, feeds from the other studios, the recording computer, and the sustaining service all come through that six-way selector. The main input modules on both consoles include three S2-CML mic/line channels, an S2-CT Telco channel with EQ, two S2-CSGE stereo and gram channels with EQ, and eight S2-C2 dual stereo channels.

"We've got three inputs for computers," adds Mole. "Also, one for carts and promos, two for automation playout, two for CDs, two for grams, and another one for an iPad. We've also got a nice wide script tray for laptops, iPads, and so on."

As an organisation, WCR does much to encourage new volunteers, and develop existing ones - an important part of a healthy charitable endeavour. "All our people that present programs are self-ops. We train them and have been doing that for 20-odd years - everything from operating the desk to doing interviews, creating running orders, and speech. We run a ten-week course twice a year, and there's an introductory presenting programme for those who have done that course and join the team.

"They all get on well with the console. It's not been a difficult transition. We've run 20-minute familiarisation sessions and created an 'idiot-sheet', which is only two pages, for quick reference. Most people have taken to it like a duck to water and they've all said that it's easy to operate."

About the Sonifex S2
S2 is a modular broadcast mixer that offers digital audio quality with analogue reliability in a modular format. It features both digital and analogue input channels, together with simultaneous analogue and digital outputs. The S2 combines all the features needed of a radio broadcast mixer in a stylish, flush-mounting chassis.

About Sonifex
Sonifex is a Private Limited Company owned by the Directors, which manufactures broadcast audio equipment for the radio, TV, security and telecommunications industries. It is a family business, started as a partnership in 1969, which supplies equipment to over 100 countries world-wide and is recognised for the quality and reliability of its designs and products.