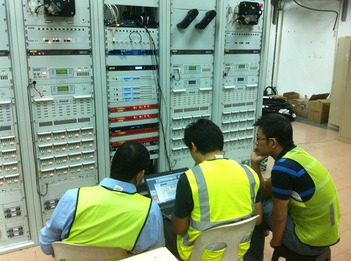 Kristal FM broadcasts nationally across Brunei from two transmitter sites and a second FM channel called Quran FM which is also broadcast by Kristal Media. They recently replaced their ageing E1 based infrastructure on Borneo Island, Brunei, with a permanent IP based studio-to-transmitter links system.

The Sonifex Redbox RB-DSD1 digital silence detection unit works in a similar way to the Sonifex RB-SD1 analogue silence detection unit, but has AES/EBU, S/PDIF and TOSlink inputs and outputs instead of analogue inputs and output respectively. Designed to switch from one input to another in the event of loss of audio, the unit is ideal at transmitter sites, or after the master output of a studio, to switch in another audio source, or simultaneous broadcast, should a master source fail.

The Sonifex RB-DA6 is a 1U rack-mount high performance 6 way stereo distribution amplifier for splitting a source into a number of different outputs. It has 1 stereo input and 6 stereo outputs and can also be configured so that 1 mono input can be distributed to 12 outputs by use of a switch which is recessed on the front panel to prevent it being accidentally knocked.