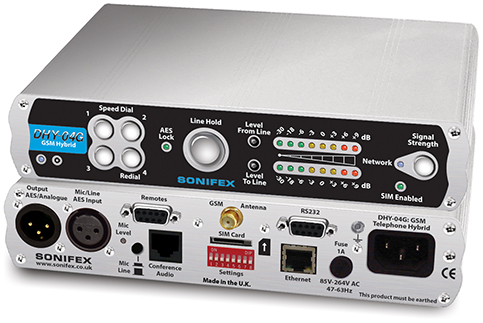 The DHY-04 telephone hybrid offers the features of the superb DHY-03 with the following additional benefits. It has front-panel speed-dial buttons and ¬auto-sensing AES/EBU or analogue XLR inputs and outputs, recognising digital inputs up to 96kHz, 24 bit. It has an Ethernet port for remote configuration and remote control of the unit with SNMP. It also has DTMF dial up recognition for reporter remote access and hybrid control over a standard POTS line.

The DHY-04G is a digital GSM hybrid which has all features of the DHY-04 but uses a 2G cellular connection instead of an analogue POTS line. Ideal for studios in remote locations and with the outstanding performance of the DHY-04.

The new Redbox RB-SD1IP silence detection unit has Ethernet & USB, offering all the functionality of the existing RB-SD1 with several extra capabilities. Ethernet connectivity allows finer set up and control via a browser based GUI together with a real time view of signal levels and alarm statuses. SNMP V1 is implemented so that the unit can be controlled by existing network management systems and GPI pins enable the generation of SNMP traps on behalf of other, non-networked, hardware. A front panel USB port can hold a pre-recorded message which the unit can play out in the event that both main and auxiliary signals fall silent.